Click on the New Books tab above to review some of our more recent book acquisitions.

African Americans in Michigan Lewis Walker, Benjamin C. Wilson, Linwood H. Cousins. East Lansing, Mich. : Michigan State University Press, c2001. 63pp. Main Library E185.93.M5 W35 2001
African Americans, as free laborers and as slaves, were among the earliest permanent residents of Michigan, settling among the French, British, and Native people with whom they worked and farmed. Lewis Walker and Benjamin Wilson recount the long history of African American communities in Michigan, delineating their change over time, as migrants from the South, East, and overseas made their homes in the state. Moreover, the authors show how Michigan's development is inextricably joined with the vitality and strength of its African American residents. In a related chapter, Linwood Cousins examines youth culture and identity in African American schools, linking education with historical and contemporary issues of economics, racism, and power.

Blacks in Detroit, 1736-1833: The Search for Freedom and Community and Its Implications for Educators / Norman McRae.  University of Michigan Doctoral Dissertation, 1982.  197pp.  Online resource

Detroit : the Black Bottom community / Jeremy Williams.  Charleston, SC : Arcadia Pub., c2009. 127pp.  Main Library F574.D4 W553 2009 : Between 1914 and 1951, Black Bottom's black community emerged out of the need for black migrants to find a place for themselves. Because of the stringent racism and discrimination in housing, blacks migrating from the South seeking employment in Detroit's burgeoning industrial metropolis were forced to live in this former European immigrant community. During World War I through World War II, Black Bottom became a social, cultural, and economic center of struggle and triumph, as well as a testament to the tradition of black self-help and community-building strategies that have been the benchmark of black struggle. 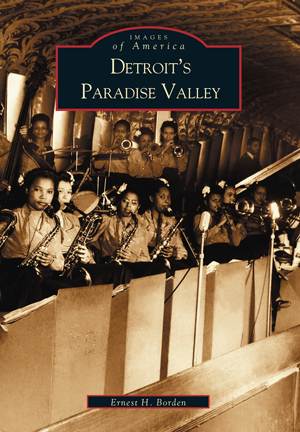 Detroit's Paradise Valley / Ernest H. Borden. Charleston, SC : Arcadia, c2003. 128pp.  Main Library F574.D4 B673 2003 {C}{C}  : One of the most prominent and dynamic African-American neighborhoods in U.S. history, Paradise Valley served as a social and cultural mecca for Detroit's black community from the 1920s through the 1950s. Now the site of stadiums and freeways, the area was once home to places like the Gotham Hotel and the Surf Club, and welcomed the likes of Billie Holiday, Joe Louis, and Sammy Davis Jr. This book uses more than 200 previously unpublished photographs to take readers on a rare tour of the entertainers, entrepreneurs, businesses, and events that made the now-lost Paradise Valley legendary. 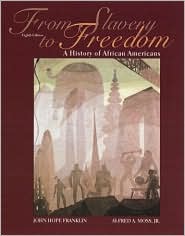 From Slavery to Freedom : a History of African Americans / John Hope Franklin, Alfred A. Moss, Jr. Boston : McGraw-Hill, c2000.  8th edition, 742pp. Main Library E185 .F825 2000 : Describes the rise of slavery, the interaction of European and African cultures in the New World, and the emergence of a distinct culture and way of life among slaves and free blacks. The authors examine the role of blacks in the nation's wars, the rise of an articulate, restless free black community by the end of the eighteenth century, and the growing resistance to slavery among an expanding segment of the black population....The book deals in considerable detail with the period after slavery, including thearduous struggle for first-class citizenship that has extended into the twentieth century. Many developments in recent African American history are examined, including demographic change; educational efforts; literary and cultural changes; problems in housing, health, juvenile matters, and poverty; the expansion of the black middle class; and the persistence of discrimination in the administration of justice....All who are interested in African Americans' continuing quest for equality will find a wealth of information based on the recent findings of many scholars. Professors Franklin and Moss have captured the tragedies and triumphs, the hurts and joys, the failures and successes, of blacks in a lively and readable volume that remains the most authoritative and comprehensive book of its kind. 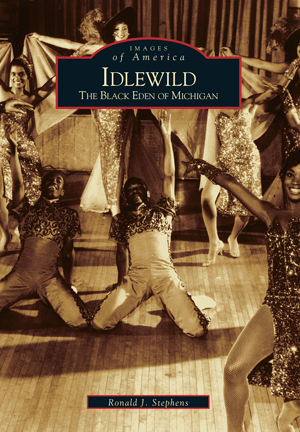 Idlewild : the Black Eden of Michigan / Ronald J. Stephens. Chicago, IL : Arcadia Pub., c2001.  128pp.  Main Library F574.I34 S84 2001 : Once considered the most famous African-American resort community in the country, Idlewild was referred to as the Black Eden of Michigan in the 1920s and '30s, and as the Summer Apollo of Michigan in the 1950s and '60s. Showcasing classy revues and interactive performances of some of the leading black entertainers of the period, Idlewild was an oasis in the shadows of legal segregation. Idlewild: Black Eden of Michigan focuses on this illustrative history, as well as the decline and the community's contemporary renaissance, in over 200 rare photographs. The lively legacy of Lela G. and Herman O. Wilson, and Paradise Path is included, featuring images of the Paradise Club and Wilson's Grocery. Idlewild continued its role as a distinctive American resort throughout the 1950s, with photographs ranging from Phil Giles' Flamingo Club and Arthur Braggs's Idlewild Revue.

SUBJECT HEADINGS : “African American” is the most common self-identifying term in use.

The following subject headings and terms can be useful search terms in many of the databases including the library catalog.

The following lists of terms are by no means complete lists of subject headings related to African American Studies. Additional subject headings can found in the Library of  Congress Subject Headings books. These are the large red books located behind the Reference Desk. If more help is needed, please ask a librarian.

In the Michigan State University Libraries stacks and reference collectiona, books with African Americans as the primary subject heading have call numbers beginning with E185.  You can browse our collection or other library’s collections that use the Library of Congress Classification System by going to the E185 sections of the stacks.

NOTE : Many other books with African Americans as subject heading will be located elsewhere in the stacks depending upon it’s other subjects.  To be sure you don’t miss items available under other call numbers, it’s a good idea to search the catalog.

Subject headings can be narrowed by subdivisions.  Read on for some examples.

Many subjects may be narrowed by geography. This may be done by adding the country, state or city to the end of the subject.