Although many of the resources listed under Web Sites contain images, this page will attempt to only cover those that are primarily images.  In addition a few additional image databases will be listed. 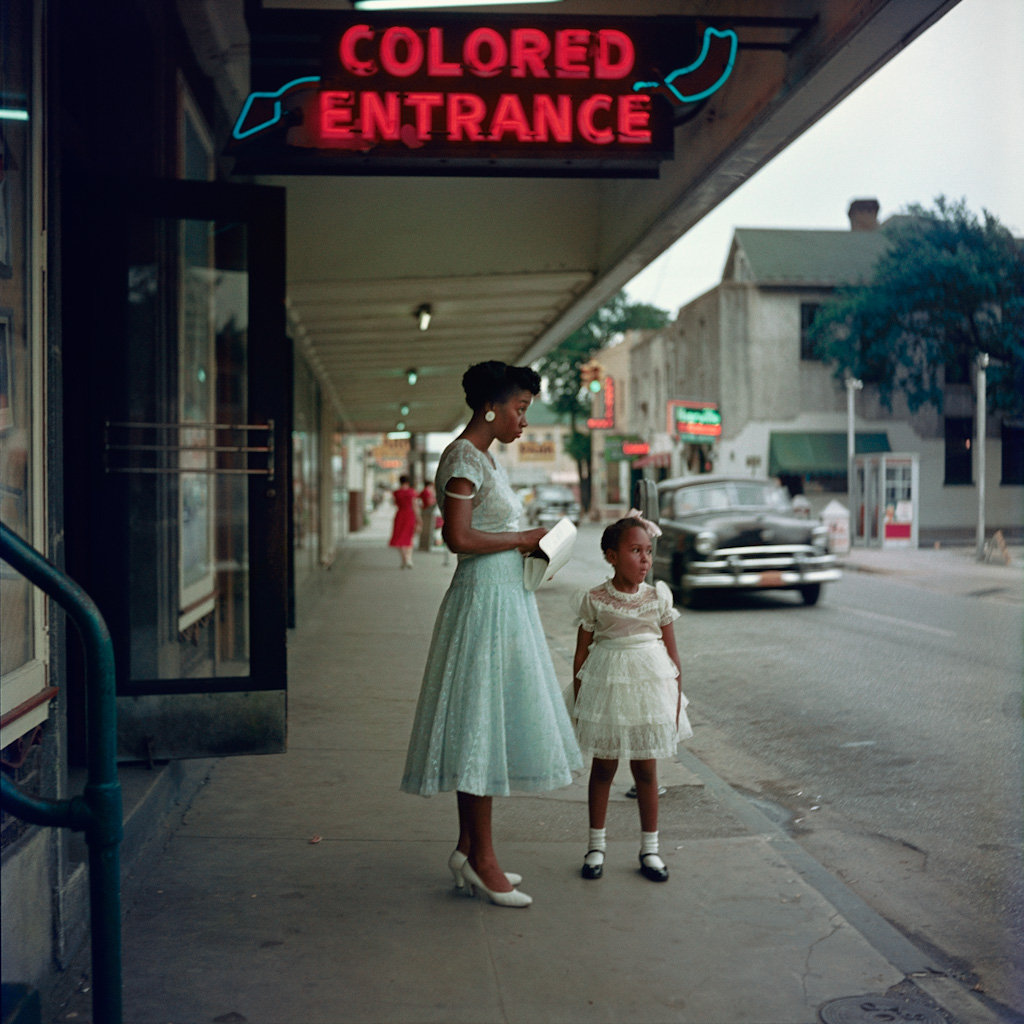 Take a look at this article for a selection of full-color images of Parks' photos of African Americans during the Civil Rights Era.

More of Parks' work can be viewed at the Gordon Parks Foundation Archives.

African American Images from the Library of Congress.  See more on Flickr Commons from institutions like the US National Archives, George Eastman House, the Smithsonian and more.

African American Photographs Assembled for 1900 Paris Exposition.  The Paris Exposition of 1900 included a display devoted to the history and "present conditions" of African Americans. W.E.B. Du Bois and special agent Thomas J. Calloway spearheaded the planning, collection and installation of the exhibit materials, which included 500 photographs. The Library of Congress holds approximately 220 mounted photographs reportedly displayed in the exhibition (LOTs11293-11308), as well as material specially compiled by Du Bois: four photograph albums showing "Types" and "Negro Life" (LOT 11930); three albums entitled "The Black Code of Georgia, U.S.A.," offering transcriptions of Georgia state laws relating to blacks, 1732-1899 (LOT 11932); and 72 drawings charting the condition of African Americans at the turn of the century (LOT 11931). The materials cataloged online include all of the photos in LOT 11930, and any materials in the other groups for which copy negatives have been made.

African American Soldiers in the Civil War.  The American Civil War was one of the first conflicts captured by photographers. In celebration of Black History Month, TIME looks at images of African-American soldiers and their families who played myriad roles in the country's bloodiest conflict. Courtesy of Time Magazine, February 7, 2012.

The Atlantic Slave Trade and Slave Life in the Americas : A Visual Record.  Jerome S. Handler and Michael L. Tuite Jr.  The approximately 1,235 images in this collection have been selected from a wide range of sources, most of them dating from the period of slavery. This collection is envisioned as a tool and a resource that can be used by teachers, researchers, students, and the general public - in brief, anyone interested in the experiences of Africans who were enslaved and transported to the Americas and the lives of their descendants in the slave societies of the New World.  Provided by the Virginia Foundation for the Humanities and University of Virginia.

Beyond Face Value : Depictions of Slavery in Confederate Currency.  A project of the Civil War Center.  Many Southern notes did not feature images of slavery; this exhibit focuses on the ones that did. This collection features notes issued and circulated in the South during the Antebellum, Civil War, and Reconstruction Eras. Notes were issued by various entities, including the Confederate government, state governments, merchants, and railroad companies.  Provides jointly by the Louisiana State University Libraries and the Louisiana Endowment for the Humanities.  Also posted under Web Sites.

Blacks Studies Center : Schomberg Studies on the Black Experience.  Click on the images choice for a selection of short images sorted into the following categories :

Historic Images of African-Americans During the Great Depression. Photographs from the Farm Security Administration which collected and kept a record of American life between 1935-1944.  Courtesy of Time Magazine, February 16, 2012.

A House Divided: America in the Age of Lincoln.  This digital history project looks at the decades leading up the American Civil War, with slavery as central to the culture and politics of the time. The site includes many images, and narration, in collaboration of historians, contextualizes them.  Also see Overview of Slavery which contains an image gallery.

Images of African-American Slavery and Freedom. The Library of Congress responded to repeated requests from patrons by putting together a collection of images. The images show various aspects of the slave trade, including depictions of villages in Africa, of ships used in the Middle Passage, and signs advertising slave auctions.

Images of African Americans from the Nineteenth Century.  Courtesy of the Digital Schomberg, 1999.

Portrait of Black Chicago.  From June through October 1973 and briefly during the spring of 1974, John H. White, a 28-year-old photographer with the Chicago Daily News, worked for the federal government photographing Chicago, especially the city`s African American community. White took his photographs for the Environmental Protection Agency`s (EPA) DOCUMERICA project. As White reflected recently, he saw his assignment as "an opportunity to capture a slice of life, to capture history." His photographs portray the difficult circumstances faced by many of Chicago`s African American residents in the early 1970s, but they also catch the "spirit, love, zeal, pride, and hopes of the community."

Powerful Days : The Civil Rights Photography of Charles Moore.  This website was produced by Ohio University Knight Fellow John Kaplan as partial fulfillment of the requirements for a Masters of Science Degree in Journalism.

Powerful Days in Black and White.  Shocking photos brought the Civil Rights Struggle to all Americans. Relive it now through the eys of photojournalist Charles Moore.  There are common names associated with the civil rights movement, like Rosa Parks and Martin Luther King Jr. And there are lesser-known names like Charles Moore. His photos, which often appeared in Life magazine in the 1960s, are the ones that put faces to a movement for most Americans.  NPR did an All Things Considered episode on him on the occasion of his death on May 16, 2010.

Selma to Montgomery : A March for the Right to Vote.  A visual history by Spider Martin.

Walter Gordon Collection of Photographs.  In the first half of the 20th century, the well-known African American attorney Walter L. Gordon had his office next to the African American newspaper, the California Eagle. The photographers for the paper often shot pictures of Black social life in Los Angeles, and once printed these photos were often discarded. Gordon saved many of these photos and began collecting the images, which often depicted leading members of the Black community in Los Angeles. His collection made its way to UCLA, and their digital collections group digitized over 800 of his photographs. Here visitors will find images of black resorts such as Val Verde, local political figures, and a range of jazz legends, such as Count Basie and Billie Holliday. Currently, visitors can view almost 300 of these items, and they can browse the photos by language, name, subject, or type. There are some real gems in here, including a great photo of Lionel Hampton on the stage and a cast photo of the members of "Carmen Jones" at an informal gathering. The image viewer here is quite impressive, as visitors can add a grid of select photos for comparative viewing and also manipulate each image as they see fit.

Although not focused on African Americans or the Civil Rights struggles, these collections do contain manage related images if you are willing to try out your searching skills!

AP Images : Also called Associated Press Multimedia Archive. Includes an ever-changing collection of over 700,000 photographs from the AP news service. Most of the images are contemporary and date from 1995 forwards, but many historical images are also included. All images include descriptive captions and source information.

Life Photo Archive Hosted by Google : Search millions of photographs from the LIFE photo archive, stretching from the 1750s to today. Most were never published and are now available for the first time through the joint work of LIFE and Google. Heh, it may not be from a newspaper but it compliments the AP Images collection.

Picture History  : An on-line archive of images and film footage illuminating more than 200 years of American history.  Click on People and Professions, and then choose African Americans.