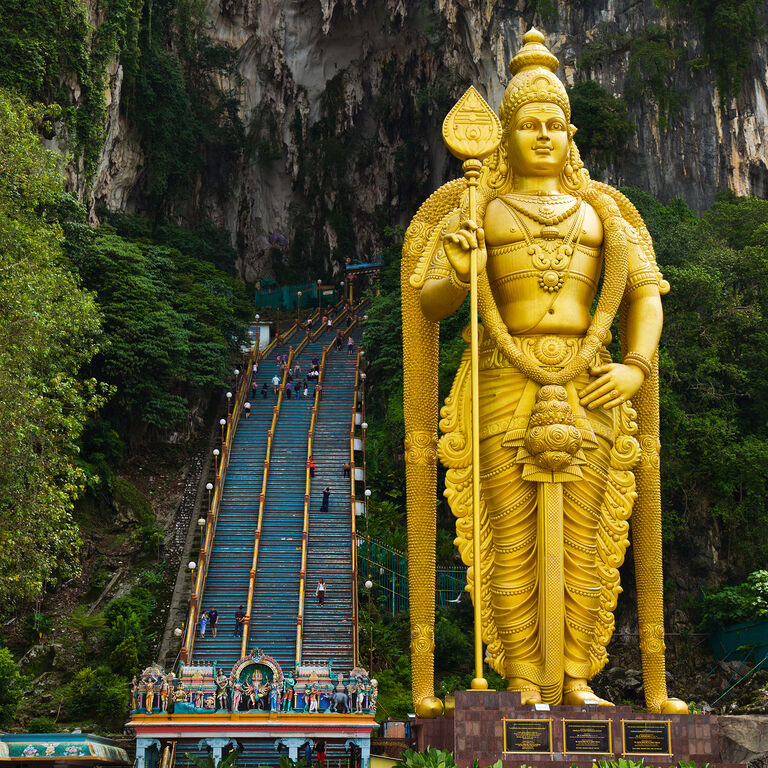 Only 15 kilometres north of Kuala Lumpur lies the most popular Hindu sanctuary outside of India: the Batu caves.

The caves are decorated with a large number of colorful, painted images of Hindu gods--depicted left.

The largest cave can be reached after climbing 272 steps.

The chalk rock formations in which the caves are found are approximately 400 million years old.

You can get a MyRapid Touch ‘n Go card which is a preloaded transport card similar to Hong Kong’s Octopus Card. Aside from the convenience of not having to buy single journey tokens, it saves you a bit on fares as well.

MasterCard and Visa are widely accepted, but it's always best to check with any vendor before purchase. Tipping is not generally expected, but leaving a small tip at a cafe or restaurant is appreciated. Note that due to a strong USD, all RM prices can be divided by / 4 for the price in USD.

In general, consider carrying RM 100 around the city, with a variety of bills.

Malaysia is a country of diversity, and the food reflects that. A dish loved by nearly all local Malaysians is known as nasi lemak, which includes rice cooked in coconut milk, topped with spicy samba chili sauce. Other popular native dishes include: Ikan bakar, nasi kandar, roti canai, laksa, and char kuay teow.

A food budget of around RM 30-50 per day will probably be enough.