The Sankofa bird is an African symbol that represents remembering one’s history, ancestors, and roots.

The utility of African and African American Studies, in my humble opinion, is to reconnect the scattered masses of African descendants throughout the “Black World” and to reconstruct their unique and distinct experiences away from the hegemonic gaze of Western and European discourses, methodologies, and ideologies.  It is about stripping away the years of erroneous information to shed light on the true depth, beauty, strength, intellectuality, and complexity of African descended populations the world over.   Source :The Emerging Black Studies Scholar : An MSU-AAAS Newsleter #4.

“It’s only the story that can continue beyond the war and the warrior…” Chinua Achebe, Anthills of the Savannah

The Griot, from the Bambara of Mali, arises as one of the African storytellers, who uses music and words to spread the history, culture, and ethics of the people-known as the living archive for the people’s tradition. Listen to the journey of the African story, hear the drums of the people far and wide communicate a beat of liberation. The Mande of West Africa believed the word or Nyama could control nature through the stars and motion the sea.  A narrative told by the people, bearers of the tradition, who lived and ruled in great kingdoms, created beautiful art, fought continuously for their freedom! Where does Black or Africana Studies come from? The word...the stories...that were first kept only for the people to hear about...Oral storytelling, we are the orators and it is rooted in African traditions. But now, we will reveal to you the rich global African culture, full of diversity...and words...spoken from the people...the people...We are here to learn Race, African Antiquity, African Diaspora, Slave Trade, Pop Culture, Black Liberation Movements, Gender, and Aesthetics. You will become a bearer of the African Tradition as you partake in interviews, online discussions, and scholarly responses...You will be given the power to speak about the African experience...can you handle the word?

Remember: “Stories are important sources of information for the community researcher — they encapsulate attitudes and beliefs, wisdom and knowledge that lie at the heart of a person’s identity and experience.” Folk Life And Oral History Interview Guide

Resources for the description and story

A Technique for Self-Reflection : Video Recording by Jordan Catapana from TeachHub.com 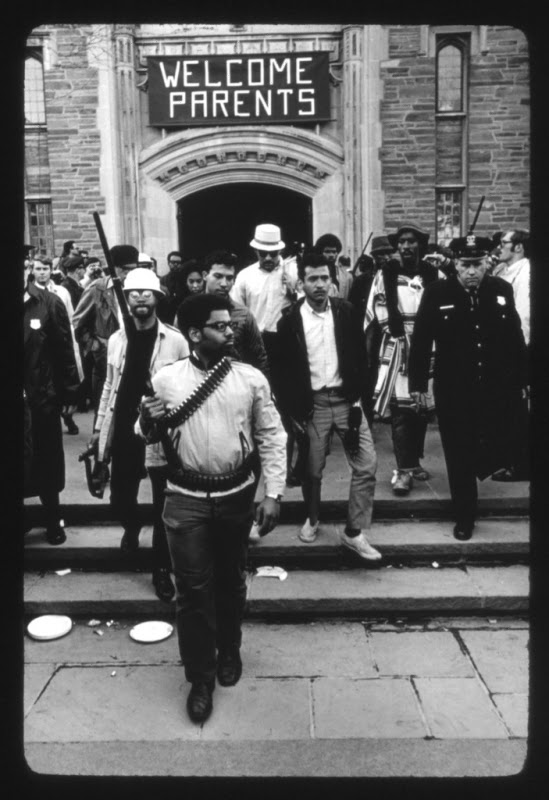 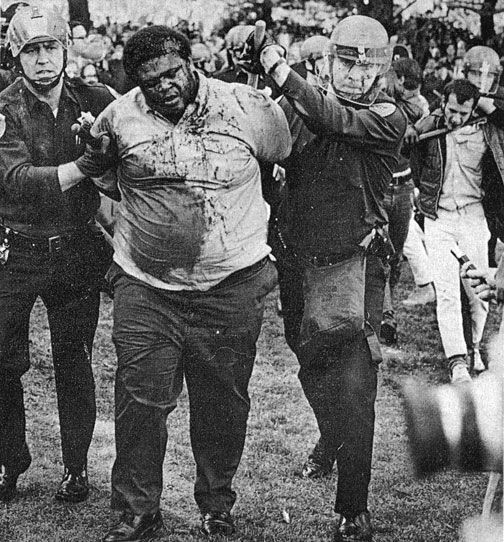 The image on the left is a part of a series of Pulitzer Prize winning photographs of the Willard Straight Hall take over by members of the student ran Afro American Society at Cornell University in April 1969. The image on the right is of Don McAllister, who was beaten and arrested by police, during a protest remembered as  “Bloody Tuesday” in December 1968 at San Francisco State University. Though generally associated with activism during the Black Power Era, it was the events surrounding these images that were directly and specifically responsible for the development of the first Black Studies programs across the country.

The empowerment of African people is the basis of the entire Black Student movement. Empowering both students and the community, the development of Black Studies programs showed both an intellectual and physical commitment for the advancement of social justice for Africans throughout the world. Whether through, conventions, courses, protests and campus take-overs, the scholar activist in Black Studies showed a commitment that is arguably not present in any other academic discipline. Additionally, this mobilization set the stage for the development of Latin American, Chicano and Native American Studies programs. Franz Fanon Quote on National Consciousness:

As a social construction, race is defined as a classification system that categorizes or groups human populations by ethnicity, culture, geography, religion and language. However, the origin of race was based on the myth of biological determinism, giving distinct inherent physical and intellectual traits to those classified as Black/ Negro/ African or White/ Caucasian/ European.  As a biological construction it was used as justification for the Trans-Atlantic Slave Trade, Colonialism in Africa and Segregation laws in the United States. It is important to critically engage in the historical evolution of race and racism to uncover the underlying social, economic, and political conditions that disproportionately channel advantages and opportunities to certain groups, while systematically disenfranchising others. Also this analysis will allow to see how these mythical beliefs are currently maintained through popular culture which, even today, have real life consequences.

Imagine that you are in a conversation with someone about recent events in the news and the Black Lives Matter campaign or the protests around the nation are mentioned.  Your friend tells you that racism is a thing of the past because “we have a Black president for cryin out loud” and  “those people who were harmed by police should have simply obeyed and things would have turned out better for them.  Another thing is that if they dressed differently and looked less intimidating maybe they would not even be looked at as a potential problem. The fault is their own.

Using this week’s readings and videos write a dialogue between you and your friend where you define race for your friend and give him/her a brief summary of the origins of idea of race. Also help them to consider that notions of race are embedded in social thought and perpetuated through stereotypes displayed in various media outlets and the impact you think this phenomenon has on how people view Blacks in society today. Be sure to respond to your friend’s notion that “racism is a thing of the past” by arguing that there are social, political, and educational, etc. implications of race experienced by people of color that others do not experience. You may write your dialogue and act it out with a friend and video tape it or just turn in the written copy. IF you do the video you still need to send in the written copy.

Below is a video commentary on the recent Baltimore protests over the murder of Freddie Gray. What are identified as underlying factors of civil unrest by Representative Cummings? Does race play a role in the creation of these factors? Explain your answer. Look at the video and write a reflective essay on your opinion of the importance of race and whether it has had an impact or played a significant role in the recent uprisings of Black people around the US and the Black Lives Matter campaign.

Below are two videos about police brutality and one blog post about the portrayal of Black protesters in the media. The first video is from Malcolm X and the second is from a community organizer,Deray McKesson, in Baltimore. What are some of the similarities in these two videos? Also what is identified as a means of invalidating Black protests of injustices and justifying the use of excessive force? How are the Black victims characterized in the media according to the blog post?

There were African Diasporas in Greece, Asia, and arguably in America.  Africans were pivotal players in important international relations in the ancient Mediterranean.  They founded strong states and empires, contributed much to the intellectual traditions of antiquity, and were autonomous beings. It is imperative to look into antiquity to create a sense awareness about African people and identity pre-colonialis/slave trade.  Also the roles of women varied from society to society but were more diverse in Africa than some other places in the ancient world.  We will discuss the significance of a historical reference point to current day Black Studies and perceptions of Blackness.

Spanning from the 15th - 19th Century, the Transatlantic Slave Trade serves as the most traumatic event in the African historical record. By tracing the origins, development and European expansion of trading enslaved Africans, this module will highlight how Imperialism impacted the economic growth of European countries, while  serving as a foundation for Africa’s systematic underdevelopment through exploitation and dispersal of Africans throughout the world. This analysis will also provide insight to ways the transatlantic slave trade contributed to the establishment of colonization via the Berlin Conference.

The Black Liberation Movement began as a means of Black people attempting to regain their freedom and autonomy that was taken during the slave trade and colonization. In order to understand the Black Freedom Movement we must deeply investigate the ideologies, organizations, and radicalism of the 50s, 60s, and 70s.  In this period we see the origins of : African nationalism and decolonization movements, the rise of the Civil Rights and Black Power Movement, a transnational movement against white supremacy, Black feminism, and the emergence of women nationals in Africa and America.

Gender analysis is relatively nascent in Black Studies discourse.  It began with the establishment of women’s studies in the late 70s and early 80s.  It continues with the more recent appearance of masculinity studies and LGBTQ studies.  This module will concentrate on women’s studies and the arguments for and against it since women’s studies was the first exploration of gender in the discipline.  It will define Black (African and African American) feminsms and discuss major debate in Black Liberation in terms of women’s rights. Also, it will touch lightly on the new emergence of masculinity and queer studies in Black Studies.

Wayne State University Historian Danielle McGuire,  At the Dark End of the Street: Black Women, Rape, and Resistance -- A New History of the Civil Rights Movement from Rosa Parks to the Rise of Black Power.

Ashley Farmer, What You've Got is a Revolution: Black Women's Movements for Black Power (forthcoming, University of North Carolina Press).  Farmer describes her  upcoming book in Left of Black S5:E29

As a means of communication, religious practice, knowledge production and resistance, aesthetics and art have always and continue to play key roles in the preservation of Black cultural systems….

Television and Stereotypes in the 21st Century

Following the recent Academy Awards given to Lupita Nyong’o and the film “12 Years a Slave” 2014, there has been much debate and discussion on the representation of Blacks in film, the roles available to Blacks, and the types of roles the Oscars awards to Black actors and actresses. Some argue award winning films such as Precious, The Help, The Butler, Training Day, and Monsters Ball reflect problematic historical stereotypes of Black men and women, in addition to symbolizing the limited roles made available to Black actors and actresses. Based on independent research, do you feel Black actors and actresses are type casted to play limiting and stereotypical roles?