Special Collections has many resources related to Asian Americans / Americans of Asian or Pacific Islander descent.  This web page will attempt to list some of them. 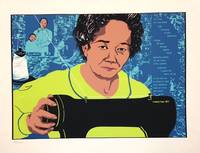 She sews in a sweatshop still dreaming of gold mountains ... / Stephen Lowe (printer), Nancy Hom (poet).   San Francisco: [Japantown Art & Media Workshop], 1980. 22.  75x17 inch screen limited edition print poster available in Special Collections.   The upper left corner has an image of a woman and young child in blue clothing. In the fore front is a woman wearing a bright green shirt using a black sewing machine. On the right is a poem in light blue text. The poem reads, "she sews in a sweatshop still dreaming of gold mountains/ reliving her past through holiday rituals/ paiently waiting for her house in the suburbs/ helplessly I watch the years roll by/ on the horizon no houses in sight just mountains made of brass and sweat. (c) Nancy Hom 1977."   "Gold Mountain" was the Chinese immigrant term for America. This was made as part of a women's silkscreen project organized by Stephanie Lowe, where an artist was paired up with a poet.

American Born Chinese / Gene Luen Yang ; color by Lark Pien.  New York : First Second, 2006. 233pp.  Comic Art Collection PN6727.Y273 A5 2006 : With vibrant colors and visual panache, indie writer-illustrator Yang (Rosary Comic Book) focuses on three characters in tales that touch on facets of Chinese American life. Jin is a boy faced with the casual racism of fellow students and the pressure of his crush on a Caucasian girl; the Monkey King, a character from Chinese folklore, has attained great power but feels he is being held back because of what the gods perceive as his lowly status; and Danny, a popular high-school student, suffers through an annual visit from his cousin Chin-Kee, a walking, talking compendium of exaggerated Chinese stereotypes. Each of the characters is flawed but familiar, and, in a clever postmodern twist, all share a deep, unforeseen connection. Yang helps the humor shine by using his art to exaggerate or contradict the words, creating a synthesis that marks an accomplished graphic storyteller. The stories have a simple, engaging sweep to them, but their weighty subjects—shame, racism, and friendship—receive thoughtful, powerful examination.  America.Gov Feature on American Born Chinese

Citizen 13660 / drawings & text by Miné Okubo.  Seattle : University of Washington Press, c1983.  209pp.  Comic Art D805.U5 O4 1983 : Mine Okubo was one of 110,000 people of Japanese descent--nearly two-thirds of them American citizens -- who were rounded up into "protective custody" shortly after Pearl Harbor. Citizen 13660, her memoir of life in relocation centers in California and Utah, was first published in 1946, then reissued by University of Washington Press in 1983 with a new Preface by the author.  With 197 pen-and-ink illustrations, and poignantly written text, the book has been a perennial bestseller, and is used in college and university courses across the country.  "[Mine Okubo] took her months of life in the concentration camp and made it the material for this amusing, heart-breaking book. . . . The moral is never expressed, but the wry pictures and the scanty words make the reader laugh -- and if he is an American too -- blush." -- Pearl Buck

Good as Lily / written by Derek Kirk Kim ; illustrated by Jesse Hamm ; lettering by Jared K. Fletcher.  New York : Minx, c2007.  148pp.  Comic Art PN6727.H275 G6 2007b : Following a strange mishap on her 18th birthday, Grace Kwon is confronted with herself at three different periods in her life. The timing couldn't be worse as Grace and her friends desperately try to save a crumbling school play. Will her other selves wreak havoc on her present life or illuminate her uncertain future?

Re-gifters / written by Mike Carey ; art by Sonny Liew and Marc Hempel. New York : DC Comics, c2007. 148pp.  Comic Art PN6727.L48 R4 2007 : "Meet Jen Dik Seong -- or "Dixie" as she's known to her friends. She's living on the ragged edge of LA's Koreatown, and her only outlet is the ancient martial art of hapkido. In fact, she's on the verge of winning a championship -- until she falls for fellow hapkido fan/California surfer boy Adam and gets thrown spectacularly off her game. As she struggles to win the tournament -- not to mention Adam's affections -- Dixie learns that in love and in gift-giving, what goes around comes around"

Shattered : the Asian American comics anthology : a secret identities book / [edited by] Jeff Yang ... [et al.].  New York : New Press, 2012. 210pp.   Comic Art  PN6726 .S485 2012 : Three years after the publication of the groundbreaking Asian American comics anthology Secret Identities, the same team is back with a new volume?bigger, bolder, and more breathtaking in scope....
While the first collection focused on the conventions of superhero comics, this new book expands its horizon to include edgier genres, from hard-boiled pulp to horror, adventure, fantasy, and science fiction. Using this darker range of hues, it seeks to subvert?to shatter?the hidebound stereotypes that have obscured the Asian image since the earliest days of immigration: the stoic brute, the prodigious brain, the exotic temptress, the inscrutable alien, the devious manipulator. The eclectic and impressive lineup of contributors includes leading Asian American comics creators Bernard Chang (Supergirl), Sean Chen (Iron Man), Cliff Chiang (Wonder Woman), Larry Hama (G.I. Joe), Sonny Liew (Malinky Robot), Takeshi Miyazawa (Runaways), Christine Norrie (Hopeless Savages), Greg Pak (The Hulk), G.B. Tran (Vietnamerica), Gene Yang (American Born Chinese), and many others, as well as such film and literary standouts as Tanuj Chopra (Punching at the Sun), Michael Kang (The Motel), Jamie Ford (Hotel on the Corner of Bitter and Sweet), Gary Jackson (Missing You, Metropolis), and Bao Phi (Song I Sing). Their original graphic short stories cover topics from ethnic kiddie shows, China’s AIDS policy, and airline security procedures to the untold backstory of Flash Gordon’s nemesis Ming the Merciless and the gritty reality of a day in the life of a young Koreatown gangster....Shattered incorporates thrills, chills, and delights while exposing the hidden issues and vital truths of the nation’s fastest-growing and most dynamic community.

Check the Library of Congress subject heading Asian Americans -- Comic books, strips, etc. in our online catalog to see if any new items have been acquired recently.  Do a wider search using MelCat (a network of participating Michigan libraries) or WorldCat (searches thousands of libraries). You can request non-MSU Library materials through interlibrary loan. NOTE: Not all materials listed in MelCat or WorldCat can be borrowed through interlibrary loan, but many can.